I am beginning to think the guy on this trip with me is a flake. He said he'd do the boat trip with me yesterday and didn't; today he said he'd buy food for a bbq and didn't; he promised to go to a museum with me tomorrow and has changed his mind. I'm aggravated. I mean, it's his vacation, but being let down is not making me happy at all. At least he let me join him and the cool kids at the restaurant tonight, although I pretty much invited myself and I wasn't able to participate in the mostly Italian convo very well.

Anyway, Wednesday we made it back on the 7:20 ferry from Stromboli (ow) and arrived in Vulcano around 9:30. Eugenio picked us up and we headed to the base for what I thought would be our quick departure for Lipari. Instead - surprise! - we were going to practice capsizing our boats and getting back in. Now, I thought it was a bit neglectful of E to not have already done this: I had to explain to Stefano how to quick-remove his sprayskirt if we rolled when we were out for our long day on Monday. But I was dismayed that we were going to do it even if I could understand the need (the crossing to Lipari was not just going to be the rather intense currents whipping between the islands, but bonus questionably high winds for kayaking - getting higher as the afternoon wore on thus need to depart quickly). Thing is, it's really stressful for me to be under a boat, and full immersion also tires you as your body tries to keep warm. So for me capsizing is like the equivalent of an hour of kayaking in terms of burned energy, and given that we were about to do something that I knew would be hard, I really didn't want to start out already fried. However, I didn't want to say anything about it as I didn't want to psyche out Stefano.We ended up doing two actual exits (and successful re-entries while Eugenio stabilized the kayak - damn is it hard to get in when you just have to power yourself up and halfway over a boat while treading water!). The exercise was different than I remembered as E wanted us to maintain hold of our paddles the whole time. I failed to do this the second time, then also was told off for letting go of the kayak (my PFD was halfway up my face and I was trying to adjust it, still my very bad), but got "bravas" overall for speed of execution and correct body positioning for reentry. But still, blech, with redeeming factor of warm water (and I had it running out of my nose until 10PM that night).And then ... we got back in the boats, as if to go to Lipari (90 minutes away), and Stefano said he was going to go back and call it a day as he was already getting chilled! I told him he'd still had an excellent day and learned some great stuff, but my overall thought was,"Thank you so very much for respecting your limits and calling time now, as this will 100% beat trying to haul the boats across the channel between the islands if you shit out then." So back we went and readjusted so all the stuff was in the double, Stefano started walking back with a promise to get food for a barbeque that night, and Eugenio and I headed out to Lipari.Now! This was the start of a great adventure and the best day of my trip. I had no fear of failure as I was with Eugenio, and he knew the currents and how to read the water, how to set us to the right point so we hit where we needed to go, and was not going to fall apart midway. So paddle paddle paddle around the headland with the small volcano on it (the 2000 year old one, Vulcanello) and there in the distance are the waves with the white caps on them and BAM! cross waves, choppy waves, SPLASH as the kayak cut into them, BLERGH as I got water on my poor cheap fake Posh sunglasses from Walmart (great eye coverage), GRRR! as we kept up our steady sploosh sploosh sploosh of our paddles, *hmm* as I looked at the five different directions the waves seemed to be coming from (and wondered how Eugenio was experiencing them from his position in the back, you can feel the currents pushing against the rudder through your feet), BZZZT as I kept dead focused on maintaining my even pace and letting Eugenio work out how to get us to where he thought we needed to land on the wind-protected side of the island.And then the wind stopped and the water went glassy and we were practically coasting by these beautiful volcanic cliffs with little caves in them and crazy folded striations on their sides where they'd twisted and buckled when they were making their melted birth, and then we slid into this beautiful cove with turquoise, crystal clear water and I said, "I have just got to take a swim here!" and so we stopped and so I did. Imagine me playing with a sea urchin and laughing in my ridiculous pink paisley swim suit, for so I did and so I was.Then it was time for Lipari town and lunch. Ah, the glorious amazement of arriving in Lipari's old port, all Renaissance Venetian looking and generally gorgeous with its church and bridge and view of the castello, in our very own us-powered boat! We hopped out and changed into slightly more town-appropriate wear (I added shorts and removed spray skirt and PFD), then went to Eugenio's favorite sandwich shop, Gilberto E Vera, where I had the most amazing sammich I'd had since the Way Old Days at Arizona State. Oh man. If only they had such things in London instead of those mortifying mayonnaise based lumps of goo we get sold at sandwich shops. 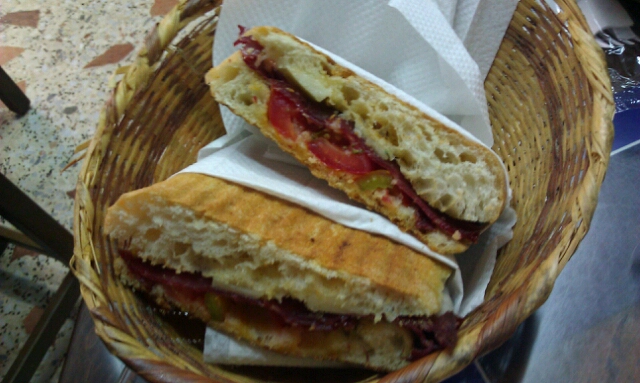 Then E and I took a tour around town in the post-lunch slowdown ("Let's do whatever you want to do, mio regina"). He stopped by a travel place that owed him some money; I went to a ceramic shop selling locally made wares and bought a salt holder (I'll use it for jewelry); he bought me an obsidian bracelet from a jewelry stand run by a gaggle of ten year olds. Then we sat down at a cafe next to the old port and had granitas. Apparently in Italy these are tiny, like the size of a juice glass, mine with the top fifth replaced with whipped cream (note: con panna is "with cream," not "with bread," which is what I heard).Then we hopped back in the boat for a tour out of the old harbour and to the new, via a passage UNDER a catamaran which kind of was cool but er creepy too. We landed on the beach and Eugenio set up the roller thing on the back of the kayak so we could take it onto the car ferry. Amusingly, the ferry ticket office was proudly decorated with pictures of the Titanic and Lusitania; I really can't imagine what they were thinking. New Italian word: "malafortuna." The car ferry was all very interesting, both in terms of the loading process (put that in quotes - should they really have let the car that needed a tow on the boat?), and in terms of the mechanics of how the ramp worked. We spent more time loading than we actually did travelling to Vulcano, which took about 15 minutes and made me glad we were not making the passage in a tiny plastic boat. (Note: below is the view of the ocean and Vulcanello on a nice day.) 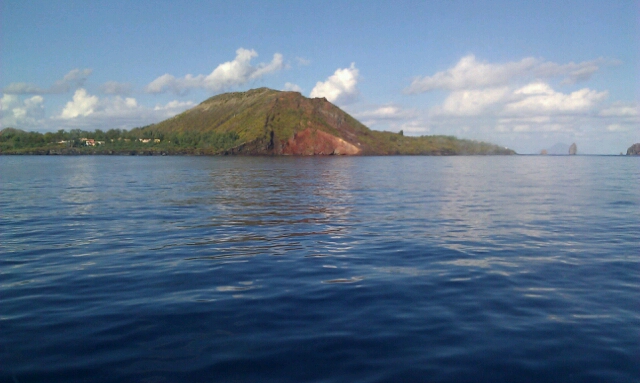 Then the boat landed and we offloaded and I, anticipating two hours at least before dinner, went to the coffee/pastry shop near the dock and bought a celebratory mini Cassata Siciliana and slipped it in the dry bag under the back hatch.Then it was back in the boat and to the base, but with a brief visit to the thermal vent part of the ocean, where I got out and swam in the crud while Eugenio visited with a woman who is going kayaking with him on the same trip on Sunday. And we got back to the base and emptied out the boat and I showered off the salt then sat down to dry and eat my cassatine while Eugenio played a slideshow of the photos he'd taken over the last few days. There I was, sitting in the boat, swimming,hanging with the guys, paddling the double by myself when Stefano bailed, giggling with the sea urchins, all pasty pale and frequently double chinned, and I though, damn, you just rocked that kayaking. And when I was dry enough, Eugenio gave me a lift back to the Eden "resort" (with all my kit from the Stromboli overnight" where S and I are staying, and I ran into Stefano & the next Sunday girl and beautiful Rocco and we all had dinner together.Stefano is bailing from the rest of the trip. Me, I have one more good day to kayak (Friday, after today's wind storm has blown through, the official last day of the week) and Eugenio and I are off to Salina via car ferry but with kayak. Maybe we'll circumnavigate the island, maybe we'll just do two or three hours of boating and try some amazing local food and do a granita comparison (depending on the wind). Either way it's gonna be a great last day.

Today was the wind and rain day from hell. I never made it to Lipari because everytime I moved it started raining sideways and aside from a full body condom there was nothing I could do to keep dry so I stopped trying. Eventually I made it into town for food and groceries and,um, gelato, then back for a big dinner with the groups from both kayaking groups (this weeks and next) plus the hostess of the campground and this cool Canadian/English couple (she's deaf and started teaching me BSL at my request). I made pasta with cream and ground pistachios (I added some cheese), and there was steak, chicken, sausage, wine, brushetta (made on a BBQ!) and two kinds of salad.

Between having a bunch of Italians praise my pasta and hearing my instructor tell someone how bravely I attacked the waves ("She was fearless! Just stared at 'em like she was waiting to cut them down!" - loose translation from Italian) I am feeling VERY pleased tonight. There is nothing like being praised for being capable to make me happy. With that I'm off to bed: boat to Salina at 8:30 AM but pickup is at 7:15 tomorrow as we have to paddle the boats to the ferry.
Collapse