wechsler as there are a few Richards out there) and I worked hard to get a nice garden planted in my back yard. This was a special year because I'm actually trying to have some flowers ready to enter into the Wakefield and North of England tulip society's annual show, so we took a whole new approach to laying out the garden in order to ensure I could keep my "breeder" and "broken" tulips separated from the purely decorative or species tulips I had elsewhere.

I spent most of the last three snowy weeks hoping the tiny irises hiding hopefully in the pot near my kitchen window would freeze to death, and look: this weekend they opened up nicely. 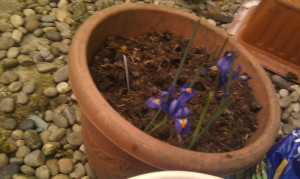 I also saw through the window that my very first tulip had come up - one of the species tulips we'd planted the previous year right against the edge of the brick wall that holds up the east side of my garden. I'm pretty sure it's the Kaufman tulip, the Shakespeare variety - it can't be a greigii because the foliage is the wrong color and I'm pretty sure the Verdi is yellow. It's a good thing I keep track of these things ... 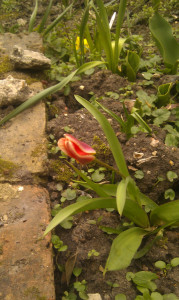 Of course the daffodils are all old news now (though they're still blooming) and the snowdrops in the lawn have gone to seed ... but tulip season is really just starting.

I had two intense dizzy spells today, once on the tube, once at work during a meeting. On the tube, I somehow manage to get a seat and sat with my head down trying to get it back together. At work, I was sitting and sweating and twitching, trying to see if I was going to move any closer to blackout (I had my hands and feet go numb and the next thing is usually the closing in of darkness, that's when I would have tried to head closer to the floor), but I was horribly in front of the CEO, CTO and my boss and desperately did not want to take sick during the meeting. I ran off to the bathroom and sat on the floor for a while then went back in; somehow I made it through. I wanted to text Richard and ask him to help diagnose me to see if we could figure out what was wrong, but, of course, there was no point in doing that.

I was going to write about how I'm still really blue but really, given that I have spent the greater part of today worrying about passing out, I'm actually feeling a bit relieved. I'll get back to depressed later. Right now I just feel like I've done a good job because I'll likely be going home on my feet instead of leaving work in an ambulance.
Collapse